Getting the Gig and Keeping It 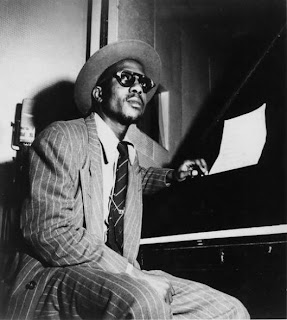 “Play what you want and let the audience catch up.” - Thelonius Monk

I read once that Monk would give a musician two takes in the studio and that's it. If they weren't happy with their solo they had to live with it on the recording forever. Talk about pressure!

One of the most important things that I learned early in my professional music performing career was what it looks like to put together a band and get paying gigs. While working as as sideman on jazz gigs with older musicians that had been doing it for more years than I had been alive I had the opportunity to be a part of and see how they did things. I learned by example what it takes to get a jazz group together and in front of people.

I was playing in a jazz quartet that had a weekly Wednesday night gig in my hometown of Amarillo, TX that ran from 1997 to 2009 until the venue closed and changed ownership. I played the gig early on and stepped out for about five years while I was living and attending school in Denton,TX.

Coincidentally, while living in Denton I also had a regular Friday and Saturday night weekend gig playing tabla with a sitarist in Dallas for two and a half years, the last year and half of which we also picked up a weekly Wednesday night gig at another venue.

When I returned to Amarillo in 2006 I was invited to play on the gig again. The lineup was usually a quartet consisting of sax, keys, bass, and drums. For a while the group featured an east coast trumpeter who was living and teaching at a college in a small town two hours away. He made the trip every Wednesday because it was the only consistent jazz gig in the Texas panhandle. For a while, the last Wednesday of the month featured a jazz big band that consisted of local players. Many guest artists sat in to play, some of whom were visiting professional musicians, music educators, and anyone with the skills to keep up or at least willing to make an honest attempt. Anyone, including students, were welcome and invited to sit it. Just don't overstay your welcome. Remember, you are sitting in, this is not your gig and you are not being hired. You might get hired later but right now you are sitting in.

One summer the leader of the group, a saxophone player and college music professor, stepped out to spend time with his family and left me with the gig. The bassist and drummer were still on board and we all loved playing the gig and the extra cash every week didn't hurt either so we kept it going. I was accustomed to the horn players often playing the melody while I comped the chords on the keys so the first thing I did was to call another saxophonist to play with us. He did for a while too, but wasn't always available for the gig so I started playing it as a trio: keys, bass, and drums. My reading improved, my leadership skills were tested, and I was forced to organize things for myself. I appreciated the opportunity and rose to the challenge. When one player couldn't make it to a gig that I booked, I would find a substitute. I was determined to play the gig regardless. On occasion and when the gig payed enough I would hire an extra musician. Sometimes when I booked a gig that the regular drummer was unavailable for I would hire a high school drum student of mine to sit in. One thing that frustrated me sometimes with the weekly gig was that we rarely practiced as a band. We would show up to the gig and read charts, many of which we knew from playing them constantly, others were sight read on the bandstand in front of a live audience. Occasionally it felt like we were practicing rather than putting on a show.

The jazz song books, or “fake books” as they are affectionately referred to by musicians contained a good number of tunes that we didn't play because they were just difficult enough that we couldn't sight read them on the bandstand successfully. We needed rehearsal time. When I started booking my a group we organized jazz band rehearsals at my house and worked out challenging tunes. Thus, our band got even better. We were developing original material as well and had that to offer. We started getting more gigs and making a buzz around our small city because we were one of a small number of jazz bands in the area that was consistently gigging as much as we were and to top it off we had a set list that was unique, challenging, and exiting, and people were digging it! I attribute that success on the fact that we were rehearsing at least once a week and consistently had anywhere from one to two gigs per week. Not to mention the fact that the three of us played together and separately in other musical projects as well and perhaps most importantly, we weren't afraid to take chances musically.

Before I got into jazz and other types of music I grew up playing in punk rock bands that rehearsed in garages and played shows at punk clubs, outdoor park stages, houses, parties, garages, anywhere. One thing that I took away from all that and still value today is the do-it-yourself attitude. We weren't waiting on anyone or anything. We had weekly band practice and worked up mostly original songs that we collectively wrote. In fact, any music project that I have ever been a part of that I have been proud of practiced consistently, usually on a weekly basis, sometimes more before a performance.

It's not that I wasn't proud of the weekly jazz gig where we read charts cold sometimes, because I was and still am. I have and continue to perform with and meet amazing musicians and have had the opportunity to play some neat gigs in part because of the development lead sheet reading skills and by gaining familiarity with the shared repertoire of jazz standards. It's fun to show up to a gig and successfully play with musicians who have never performed nor rehearsed together because we can read charts and know a lot of the same tunes. Sometimes though, it just felt like practice on the bandstand and I wanted more organization so that we could challenge ourselves and grow as musicians, but also so that the audience's experience of the musical performance was higher and we came across as professionals who care about and know what they are doing.

Consistent rehearsals and set list organization resulted more or less directly in the band getting more gigs. Marketing, networking, negotiation and communication skills play an important part too, but the music and personnel have to be in place first.

I always tell young musicians to get together with their friends and put together a band, to make music with and perform for other people. I absolutely appreciate and must have my personal music time. Occasionally I'll do the solo performance thing, but what this musical journey is ultimately about for me is playing music with other people for people and it always has been.