Through Music to the Self: How to Appreciate and Experience Music Anew by Peter Michael Hamel 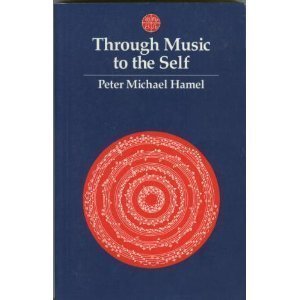 I just finished reading Through Music to the Self: How to Appreciate and Experience Music Anew by Peter Michael Hamel which was recommended to me by my beatnik/jazz musician friend Jim Griffin and found it to be an engaging and enlightening read. I highly recommend this excellent book to any student or lover of music.

Here is the description from the back cover:

What does it do to us?

What does it reveal to us?

Today, due to our ability to record and reproduce sound mechanically, we hear a great deal of music. Are we losing the art of listening to it? Do we really benefit from it?

Peter Hamel, born in 1947, studied music, psychology and sociology in Munich and Berlin, after which he spent three extensive periods in Asia studying Eastern traditions of music.

Now a practising composer and musician, he has become convinced that through encounter with the ancient and unspoilt non-European disciplines it is possible to re-discover the natural laws and the magical powers of sound. In this practically-based book, he discusses the effects on the human psyche of Indian, Tibetan, Arabian and other Far Eastern techniques of vocal and instrumental improvisation, especially in the religious context.

Relating the exoteric sound lore of these traditions with the rational Western tradition and its modern research into harmonics, the conformity of the harmonic series to natural law is seen as pertaining on the one hand to the level of mystical experience and on the other to scientifically demonstrable psychological effects.

We therefore have the ability of chant, rhythm and melodic patterns to invoke the deeper levels of experience which transcend our subjective self-concern; at the same time these effects need not be arbitrary and accidental. Through experiment with sound, even those without musical training can awaken to a new consciousness of its powers and derive renewed strength for everyday living.

There are sections dealing with modern group music, psychedelic music and drugs, mantra, relationship of vowels to parts of the body, meditation, music therapy, breath and voice, singing and "one's own sound".

This is a book for those who suspect that music is more than entertainment or an obligatory cultural activity and who with to explore its powers as a tool for self-development."


As a student and lover of the Classical music of India, I especially appreciate Hamel's section of the book devoted to this beautiful musical tradition. Topic covered in this chapter include the concepts of raga, rasa, tala, Indian music studies, Nada Yoga, and a "Singing Sahdu on the Ganges"

Below are some of the artists mentioned in the book.


Sitarist Ravi Shankar performing with Allah Rakha on tabla at the Monterey Pop Festival in California, 1967. Shankar's performance lasted 4 hours and played a major role in the introduction of Indian Classical music to the West. The festival also included performances by Jimi Hendrix, The Who, Janice Joplin, Otis Redding.

Teacher of the "Singing Sadhu on the Ganges".

Hamel tells the story of meeting an ascetic musician on his way to see the Indian holy woman Ananda Mayi Ma. This sadhu lives in a tent on the edge of the Ganges river who teaches him singing and Nada Yoga.

"Nāda yoga is an ancient Indian metaphysical system. It is both a philosophical system , a medicine, and- as the name suggests- a form of yoga. The system's theoretical and practical aspects are based on the premise that the entire cosmos and all that exists in the cosmos, including human beings, consists of sound vibrations, called nāda. This concept holds that it is the sound energy in motion rather than of matter and particles which form the building blocks of the cosmos."

Hamel cites Ravi Shankar from "My Music, My Life"

"These great musicians were not just singers or performers, but also great yogis, whose minds had complete control of their bodies. They knew all the secrets of Tantra, hatha yoga, and different forms of occult power, and they were pure, ascetic and saintly persons. That has been the wonderful tradition of our music -- and even today, though such miracles may not be performed, one can see the immense impact on the listener and, as many put it, the 'spiritual experience' the listener feels."

He finds out later that this man was a disciple of the great singer Abdul Karim Khan. At his death in 1937 Khan was reckoned to be India's last great musical genius and singer.

In his book Hamel briefly mentions the Karnatic South Indian vocalist named Subbulakshmi who I had never heard of. I was delighted to find that recordings of her have been uploaded to YouTube.


One of my favorite parts of the book was a section about finding your "Sa". Sa is the tonic note in Indian music and every singer finds their own Sa based on their particular voice.

Here is a nice blog post about this subject: http://shabadkirtan.blogspot.com/2009/02/your-own-sa-and-vocal-range.html

The instructions in the book say to sing your lowest comfortable note and that becomes Ma below Sa.